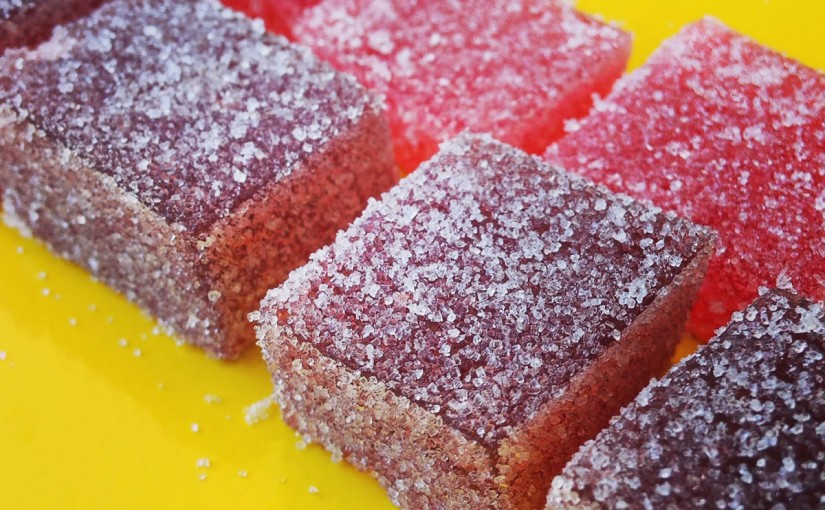 Traditional pâte de fruits have a lot going for them. Namely, they’re made with a high proportion of fruit, which translates into complex and often intense flavour that retains much of the character of a particular harvest.

That said, they aren’t my go-to jelly candy. As I went on and on about in my last post, they’ve got a few big things working against them.

And yet, I’m not ready to give up on pâte de fruits. It’s still great stuff, and there’s definitely a kind of romance to the idea of cooking down little else but fruit and sugar and, ta-da, out comes candy.

So I’ve been playing with the basic recipe pretty extensively, trying to minimize the things I don’t like about pectin jellies, pushing the taste and texture in different directions, but without resorting to manufactured flavours or designer pectins.

Here a few of the tactics I’ve tried along the way.

My unscientific guess is that the fibre loosely associates with some of the water in the recipe, effectively preventing the water from getting properly bound within the gel matrix. (I also have this image in my head of the fibre acting like microscopic candle wicks, providing tiny capillaries for water to migrate through the gel. But that’s really just fantasy, and I don’t have any real science in my pocket to support that.)

If you limit the amount of fruit purée in a recipe, you limit the fibre, and you reduce the sweating. That can be as straightforward as using fruit juice rather than purée, and it also has the side benefit of firming up the texture of the jelly at the same time.

Easy peasy if you’re using a flavouring ingredient that is naturally intense — especially something that’s too intense to consume fresh, like cranberry juice, aronia juice, or ginger juice. If you’re using something more subtle, like apple juice, you may struggle getting enough of the characteristic flavour into the final product with juice alone.

Also, some fruits just don’t juice very well; if you’re playing with mangoes, peaches, pears, and so on, you could bust out some pectinase enzyme from your local winemaking shop to extract enough juice. (To be safe, make sure you denature the enzyme with heat before you combine it with the pectin in your jelly recipe, or you’re going to be really sad when you’re staring at a puddle of syrup where your jellies are supposed to be. )

Of course, I’m assuming here that you’re working from fresh produce. You could also cheat and use commercial juice concentrates. But, alas, that’s many steps removed from the actual harvest, and will give you a more industrial product with all of the specialness sucked out.

Note that this connection between fibre and sweating is not really the primary reason why low-quality candy manufacturers rarely use any significant proportion of fruit purée in their pectin jellies. They’re just looking to cheapen and standardise their formulas, and manufactured flavours help them do both easily. The fruit juice concentrates that you see in these formulas are not really there for flavour; they’re in there to create a deceptive health halo (“made with real fruit!”). That’s why manufacturers almost always choose subtle, sweet juices that have had their characteristic flavours blasted away by the clarifying and concentrating process. (White grape, apple, and pear — I’m looking at you.)

One final semantic conundrum for you to puzzle over. Pâte de fruits literally translates as fruit paste. (Barf, right?) So if you nix the purée entirely and switch to juice, then what exactly are you making?

The boiling temperature of sugar solutions goes up as the sugar concentration goes us, and that’s more or less the minimum temperature needed to create a microbially stable candy.

The problem here is that such a low temperature leaves you with a syrup that’s only around 70–72 percent sugar (or 70–72°Br). In old-school candy making terms, that’s below the thread stage. So there’s a lot of water still in there to bugger things up.

So why do the recipes call for such a low temperature? Because it gives a fresher fruit flavour with less caramelization. The cost of that is a softer texture, plenty of weeping, and a shortened shelf-life.

You can indeed take a pâte de fruits mixture up much higher than 106°C, and the texture will change dramatically along the way as the sugar itself starts to lend more body and bite to the jelly. (The relative concentration of pectin increases at the same time as more water is removed, although I reckon that the sugar has a much greater impact on the final result in this case.)

By around 113°C (235°F) or ~82°Br — which is right at the start of the soft ball stage — you’ll find yourself with a distinctly denser bite and much less sweating. Take it all the way up to 120°C (248°F) or ~87°Br, nearly entering the firm ball stage, and you’ll have a completely different beast on your hands compared to a 106°C jelly. It’ll have a very firm, dense, yet yielding bite — reminiscent of a spectacularly smooth, short caramel.

Sounds great (and it is), but there are tradeoffs that need to be made here. For one, you’re going to lose all of those fresh flavours and get a lot of caramelized ones in return. Doubly so if there’s a lot of fibre or acid in your formula. In fact, unless you are using a clarified juice, you may not be able to even get your mixture up to 120°C without scorching.

As it happens, this can work out in your favour if you’re using fruit that people happen to love cooked and caramelized, like apples or pears or plums. But it’s not something that you’d want it do to really spectacular, distinctive produce with a lot of character, because it’ll all end up tasting more or less the same as middling produce would.

The chemistry is all very complicated and is likely to give you nightmares if you delve into it too deep.

Luckily, the basic idea is simple: the more fruit ingredients you add to your syrup, the browner the final result, especially if you’re cooking to a higher temperature than normal. That adds up to stewed and caramel flavours rather than bright and fruity flavours.

Since the reactions are dependant on the amount of time that the sucrose and the fruit ingredients are in solution together, you can potentially limit the effect by  adding the purée or juice later in the cooking process.

This is a big departure from the traditional technique, and the timing and dosage can be tricky. Add the fruit ingredients too late, or add too much, and you run the risk of the gel setting up too quickly with a lumpy or grainy texture, or not setting up at all.

That doesn’t mean it can’t be done. Although I need to do more refinement and experimentation, I’ve seen some promising results. The photo below shows two different batches of raspberry pâte de fruit: the dark one using the traditional method, and the light one using this modified technique. In addition to being visibly less browned, the second batch turned out much brighter-tasting, less jammy, less caramelized, and retained more of the fruit’s characteristic flavours. It was, however, slightly more tender and sweaty.

This one is obvious. More pectin equals stronger gel equals less weeping and a firmer texture.

Most pâte de fruit recipes hover around one percent pectin — or even less if they include apple or another pectin-rich fruit.

Push the pectin up to two percent, and you’ll discover a few things. For one, the syrup itself is thicker and more prone to scorching, which makes it difficult to cook it to higher temperatures.

For another, the mixture wants to gel so badly that it’ll look for any excuse. A cold spoon. Too much lemon juice. Leaving it off the heat for a moment. It’s really itching to ruin itself now, so don’t give it any excuses.

Lastly, the final product. Although the gel will be firmer and drier to the touch, it will also taste more “locked up” and even a little crunchy. It’ll hold some of its sweetness in, which can be good, but it also won’t release its aromatics as readily, and it’ll persist in the mouth as smaller and smaller rubbery bits as you chew. Not great.

When it comes to gelling agents, tiny amounts can make a huge difference. Between zero percent and two percent, there’s a lot of wiggle room. Go ahead and play around.

Oh, and do yourself a big favour and use an accurate digital scale.

No. 5: Kill moisture after the fact.

Dehydration is a common technique with several types of jellies, but for whatever reason I’ve never seen it recommended for pâte de fruit.

Starch-based jellies, for example, are routinely conditioned in drying rooms to remove moisture, firm them up, and prevent weeping once they are sanded and packaged. Perhaps it’s mostly a matter of scale: pastry chefs and small-batch candymakers are the ones making pâte de fruit, and they’re the ones least likely to have the space for proper conditioning.

I’ve tried it on a small scale, and it does in fact work as you might expect, firming up pectin jellies and reducing syneresis. (Although really sweaty jellies may get crusty before enough water is pulled out.)

Here, again, you’re facing some trade-offs. The more you dry, the more aroma volatiles you drive off, especially those coveted fresh, light notes. This can be mitigated by dehydrating at lower temperatures. Inevitably, though, exposure to the open air will introduce oxidized flavours: think dried fruits, fruit leather, Madeira, and black tea.

You can tastes this as it’s happening. Quite a while back, I used a fresh purée of Coronation grapes to make an agar jelly and tried conditioning them at ambient temperature. The gradual transition from fresh grape to wrinkly grape to raisin was so distinctive you could have plotted it on a graph.

Related to dehydration, I’ve also seen pâte de fruit recipes (like this one) that suggest using high-proof spirit alcohol as a desiccant to form a leathery skin on the outside of the jellies. Rectified spirits are a major pain in the ass to buy where I live (British Columbia), so I haven’t tried this myself.

Nobody said pectin had to be a solo act. Plenty of vegetable gums and other natural-sourced hydrocolloids have the potential to work alongside pectin and massively alter the final jelly’s characteristics.

I’m not going to lie: it’s a dark and deep rabbithole that you’re heading into here. There are bazillion moving parts, from dosages to ratios to ingredient interactions to technique to timing to temperature.

If you see me down in the warren, make sure you say hello.