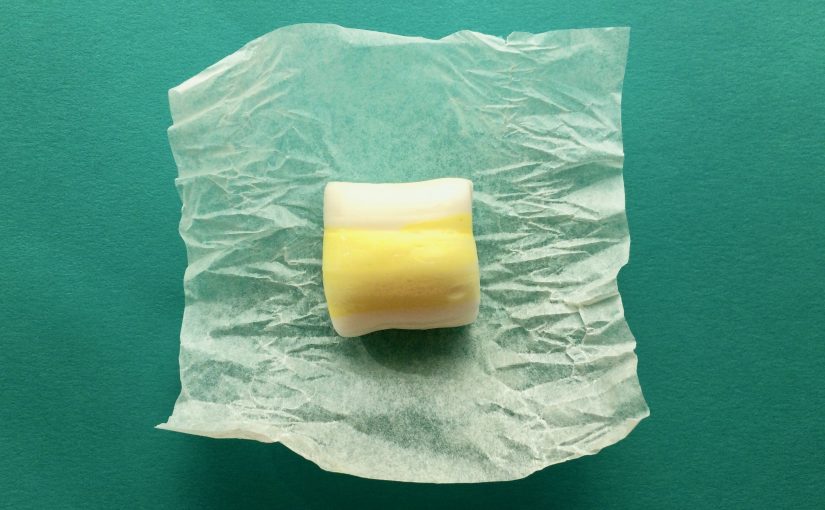 I’ve been spending a whole mess of time perfecting my taffy recipe lately, and whenever some poor soul gets me going about it, the first question is almost always the same: “Wait, what’s taffy again?”

For such a prosaic candy — you can buy some version of it quite literally at every gas station and corner shop across much of the world — taffy has a bit of an identity problem.

First, it doesn’t have a clear, unambiguous category name, at least not in English. (Unlike, say, gummies. Use that word and everyone knows exactly what you’re talking about.)

In Canada and the USA, taffy is most often called either taffy or fruit chews. In most of the UK and Ireland, it’s never taffy — only chews or fruit chews. In Australia and New Zealand, toffee seems to be the frontrunner. Aside from those, you’ll find a whole gamut of vague descriptive terms: “soft candy” or “chewy candy” or “chewy sweets” or “chewy lollies” or “chewing candy.” There are even a few outlier names like “milk chews” or “white caramels,” usually spotted on translated packaging. And yet, the most common way to refer to these candies seems to be by brand name: think “Starburst” or “Hi-Chew.”

Second challenge: aside from a few core ingredients, recipes for taffy vary substantially. Some versions have milk, others don’t. Some have gelling agents, others do not. Some have butter or egg white, some have neither. (I’ll go into more depth about why in a future post.)

As a result, it’s tough to just look at an ingredient listing and say with certainty that what you have in your hand is in fact taffy. That’s not to say it’s impossible. But first, a look at where taffy came from in the first place.

Once upon a time, in both Britain and English-speaking North America, toffee and taffy were variations on the same word. This slipperiness probably started at some point in the late 18th Century and persisted well into the 20th Century.

And they were, with many small regional variations, essentially the same idea: some combination of treacle, molasses, or sugar (usually minimally refined), boiled together with butter, and sometimes with a small amount of flour or cream. This would yield a confection that tasted mostly of molasses, butter, and caramelized sugar, and was either a very hard candy or a slightly more yielding hard-ish candy that you could slowly warm in your mouth and then (cautiously) chew.

Over time, particularly in the mid- to late-19th Century, further variations of this base recipe evolved into distinct ideas. Add lemon oil and maybe some ground ginger, and you had butterscotch. Add more dairy, and you had soft toffee or caramels. Nuts show up in many recipes, as do other flavourings like rum, sassafras, and vanilla.

At some stage in the 19th Century, various industrious candymakers had the bright idea of pulling the toffee/taffy to incorporate air and make it lighter and softer. Eventually, this variation led to a fashion for “candy pulls” or “taffy pulls” as social events — particularly in Wales and later in Canada and the USA — where sticky hands, storytelling, and light flirtation combined into a heady mix, especially around Christmas and New Years.

(Old-timey racism sidenote: Taffy is also an old Englishmen’s slur for thieving Welshmen. This is probably completely unrelated to the former popularity of taffy pulling in Wales, where the confection was known variously as taffi, ffani, or cyflaith.)

Taffy & toffee get a divorce

This brings us to the eventual divergence of taffy or chews as a distinct idea from toffee.

By the mid 19th Century, you could already find cookbooks with toffee/taffy recipes that drastically dial down the molasses and caramel vibes with increasing emphasis on white sugar and added flavourings like lemon and orange. (See “Everton toffee” in Mrs. Beeton’s Book of Household Management from England, or “Taffy” in Civil War Cooking: The Housekeeper’s Encyclopedia from the USA, both published in 1861.)

Most of these lighter variations appear to be hard, unpulled sweets at first, but with the rising popularity of taffy pulls it was probably inevitable that pulled versions would emerge.

It’s important to keep in mind that Anglo food culture in the late 19th and early 20th Centuries was obsessed — OBSESSED — with white foods, especially when it came to sugar. White sugar was seen as purer, higher quality, less likely to be adulterated, and just plain sexier.

Pulling not only aerates candy, it also makes it significantly lighter and more opaque, turning black molasses candy into a satiny light brown, and lighter treacle- and sugar-based candies very light beige or even pure white.

And so, moving into the 20th Century, two things had happened: one, a new style of white, flavoured, chewier toffee had been born, and two, the word taffy had died out completely in the UK, leaving Canadians and Americans as pretty well the only people still using the word.

Molasses candy or molasses taffy persisted as the earliest version of this chewy sweet, but more and more the emphasis was placed on a candy that provided a clean, neutral canvas on which to feature novel flavourings.

Because it is highly sensitive to moisture content, taffy generally calls for highly concentrated flavourings.

And so, perhaps unsurprisingly, flavour trends in taffies can be mapped roughly to whatever strong flavourings were commercially available, relatively inexpensive, and new and exciting at any given moment in time.

The earliest of these white toffees most commonly featured natural spices or spice extracts — ginger, clove, cinnamon, anise, liquorice, mint, and wintergreen — and citrus peel flavours, alongside the dairy flavours of butter or cream or condensed milk.

By the turn of the 20th Century, new, synthesized flavours had started to come on the market. Although some of these — like vanillin — were researched expressly as cheaper substitutes for natural materials, many started as happy accidents. This was especially the case with fruity, easy-to-make esters like isoamyl acetate, amyl acetate, and ethyl acetate.

Because of their simplicity — just one chemical, instead of the dozens or hundreds found in natural materials — these tended to taste fruity in a very clean, abstract sort of way, and survive today in the kind of old fashioned sweets that always prompt people to ask what the hell the flavouring is supposed to be. Think pear drops, pink bubble gum, circus peanut marshmallows, and Juicy Fruit gum.

(For more about the connection between whisky distilling, Juicy Fruit gum, and honey bees, take a boo at this handy post about isoamyl acetate on Smells Like Science.)

Over the decades, as flavour chemistry got more sophisticated, “abstract fruity” gave way to grape and blackcurrant and strawberry and cherry and other “specific-but-neon-artificial fruits” that we know and love in our candy.

When Starburst debuted as Opal Fruits in the UK in 1960, the four original flavours were strawberry, lemon, orange, and lime; that reflected limited consumer preferences but also a limited flavour palette available for fruit-flavoured products at the time.

Naturally, every decade since the 1960s has seen its own candy flavour trends — from tropical fruits, to sour flavours, to “candy flavoured like other sweets and desserts,” to “superfruit” flavours, to the return of natural flavours — all of which have found their way into taffies and chews along the way.

This brings us to salt water taffy. If you’re not familiar with it, it’s a style of taffy that originated on the boardwalks of Atlantic City, New Jersey in the late 19th Century and subsequently spread to seaside resorts along the New England coast, up into Atlantic Canada, and then places inland.

For many Americans, this is the one and only taffy. There’s a whole history of regional debates and trademark disputes and lawsuits and apocryphal tales over who gets to claim the taffy as their own invention.

But the truth is, this is a just battle over marketing. Because here’s the thing about salt water taffy: it’s really not much different than the taffy/toffee/chews made and eaten elsewhere before and after the term salt water taffy was first used.

There are a few subtle distinctions, mainly that salt water taffy tends to be softer and more aerated than taffy made in other styles. It’s possible (as in, I haven’t seen info to suggest otherwise) that this is also where glycerine found its way into taffy recipes, although glycerine is such a secondary ingredient that this is not a major distinction.

And no, it doesn’t normally contain seawater — that’s just a clever move to allude to the seaside.

The way I see it, the whole salt water taffy scene definitely contributed to popularizing taffy as a distinct confection and probably kept the word taffy alive in North America while it was dying out elsewhere. However, the idea that taffy was invented in Atlantic City is a misapprehension.

This is of course a very Anglocentric history, since I’m relying on English-language sources.

Given the core simplicity of the toffee/taffy idea — and the close proximity of the nougat/torrón idea — it’s very likely that parallel versions of this style of confection have emerged at various times in various places, especially in the great sugar confectionery traditions of the Middle East and south-western Europe (especially Spain and Italy).

If you happen to know more about that, please don’t be shy about schooling me.

I’ve also been really lazy here about dates and sources, because I’m not a food historian and this ain’t an academic paper. If you want to dig deeper, a good online resource to start is The Food Timeline site, by the late Lynne Olver. It’s a homely 90s-lookin’ thing, but it’s heaving with great resources on the history of confectionery.

Here’s the entry on toffee/taffy/butterscotch/caramel if you’re champing at the bit.

AND SO, FINALLY, what in the hell is taffy?

With the history taken care of, we can hazard a definition of taffy or chews as a distinct style of candy that just happens to go by a lot of different names.

A unique combination of lower cooking temperatures, the addition of fat, and pulling after cooking all work together to keep taffy pliable, chewy, and semi-solid.

With the exception of the original molasses version, taffy offers a clean, neutral base for a whole variety of spice, fruit, and other flavours. Much like sorbet or ice cream.

Taffy is essentially a slow-moving liquid, so it is almost always individually wrapped to keep pieces from fusing back together.

Taffy is related to soft toffee and caramels, but lacks the butter-centric, caramelized flavours of those sweets. Maybe think of it as “white toffee.”

Although not closely “genetically” related to nougat or torrón, taffy recipes have a lot in common with the chewy versions of those sweets. The big difference: taffy is not (normally) aerated and set with egg whites, and doesn’t (normally) have additions like nuts or dried fruit.

This one may seem obvious, but the most important thing that sets taffy, toffee, and caramel on one side of the border across from fondant and fudge is that they always contain a doctor (like cream of tartar, lemon juice, and glucose syrup) to stop the sugar from crystallizing. That keeps the texture long and chewy and smooth, rather than short and crumbly like fudge.

Naturally, the world provides examples of weird hybrids: fluffy nougaty taffy, grained fondant-like taffy, nut-butter-stuffed taffy, caramel-flavoured taffy, chocolate-coated taffy, and so on. But you get the general idea.

AND THUS, these are all (arguably) types of taffy

Here are just some of the better-known examples that spring to mind, along with their countries of origin.

This is very partial list, of course — if you have a fave local version, speak up.

Coming up: the essential ingredients of taffy, a handy typology of chewy sweets, and a quick guide to making sense of all of the other ingredients you see popping up in taffy and chew recipes.