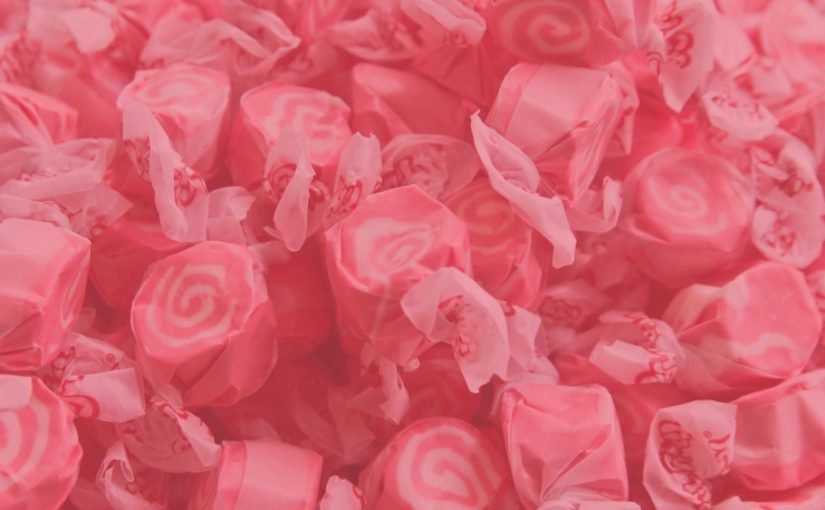 We’ve already covered the essentials of what makes a taffy or chew. And while it does takes some elbow grease, it’s not a mind-blowingly complex recipe.

However, if you pay attention to ingredient labelling on commercial taffy or chews, you will see a fair number of secondary ingredients pop up over and over. Let’s take a boo at some of those.

While some of these additions can be chalked up to different regional variations or styles, it’s important to understand that most secondary ingredients are there specifically to address three of the defining characteristics of this type of sweet.

Since it’s only cooked to a relatively low temperature — usually the soft-ball stage between 112–116°C (234–240°F) — taffy still has quite a bit of moisture in it. That means it flows slowly at room temperature, and needs to be wrapped individually so the pieces don’t re-agglomerate into one giant sugary blob.

The reason for this lower-temp cooking is strictly textural. If you cook it higher, it’ll be tough to chew and will glue itself to your molars. And if you cook it lower, it’ll be too fluid and flabby and will escape from the wrapper and make an ungodly mess.

For this reason, starches, proteins, and gelling agents are sometimes used to reduce cold flow, modify the texture, and make the taffy easier to handle without having to cook it to a higher temp.

The purpose of the pulling technique that defines taffy is to introduce air. While not as extreme as with marshmallows and meringues, this aeration makes the taffy softer, less clingy, more opaque, and whiter.

Sometimes egg whites or soy proteins are added to taffy recipes to boost the aeration and give a lighter, fluffier, more nougat-like texture.

All of these sweets are essentially glasses made from sugar with a small amount of water incorporated, so tiny changes in moisture level can create big quality control issues.

Some of the common secondary ingredients in taffy are there specifically to mitigate moisture problems: excessive softness and stickiness on one extreme, and a stale, gritty, or hard texture on the other extreme.

So, with these three qualities in mind, let’s dive into the actual ingedients.

Dairy shows up in taffy in the form of evaporated milk, cream, or more processed equivalents like powdered milk or “milk solids.” (I’m not counting butter here, since it mostly serves as the fat in the recipe.)

Functionally, these ingredients obviously add a dairy flavour and somewhat increase the whiteness and opacity of the taffy. Thanks to the presence of casein and other milk proteins, they also improve the “set up” of the final product and reduce cold flow, similar to how dairy ingredients work in soft caramels and toffees.

Milk is especially common in many US Eastern-seaboard-style salt water taffy recipes, and could even be called the defining ingredient of that style.

I’ve rarely seen dairy in other commercial recipes for chews, with the exception of some modern Japanese and Chinese products that are marketed as “white caramels” or “milk candy” and have a very dairy-forward flavour.

Milk is also missing from historical recipes for molasses taffy, as far as I’ve seen in my own reading. So my educated guess would be that dairy found its way into some versions as part of the evolution of taffy from a caramel- or molasses-flavoured candy into a whiter, lighter confection with other added flavourings.

I don’t work with dairy myself, so I can’t offer much more insight here on how to use it in taffy. For me, milk flavour is musty and over-dominating and tends to interfere with other flavours.

One of the stand-out strengths of taffy is that the base recipe provides a very neutral flavour foundation that really highlights and enhances your feature flavour; I find dairy tends to work against this strength and make everything taste samey, plus it outright clashes with some flavours. Your mileage may vary, of course.

Egg white — or its industrial cousin, dried powdered albumin — shows up in some taffy recipes for the same reason it’s used in nougat: it maximizes aeration and reduces cold flow in the final product. In most nougat recipes, there’s enough egg white to completely eliminate cold flow at room temperature.

Eggs seem to be a more recent addition to the taffy canon, rarely showing up in older taffy recipes. If I’d hazard a guess, I’d say they made their way into taffy production primarily to make the taffy quicker to pull and easier to handle and wrap.

Some folks may also prefer the softer, foamier, marshmallowier texture of this style, although I’m definitely not among those folks. (In fact, fuck marshmallows, for real, I hate them.)

Typically, in a nougat recipe, the egg white is beaten and aerated first into something resembling a meringue or frappé. Separately, the sugar syrup is cooked to temperature, and then streamed into the meringue so that the carry-over heat cooks and sets the whites.

I suspect that taffy with egg whites uses a similar process, although with proportionally less egg. However, I don’t work with eggs and I don’t have first-hand experience making this hybrid style of nougat-taffy, so I’m not going to be much help here either.

(Side note: I’ve played around with aquafaba just for kicks. It provides aeration but doesn’t enhance the taffy’s set-up, which is pretty well what I expected in light of how aquafaba performed in other recipes. All of my test recipes turned out foamy but too soft.)

Also called glycerol, this is a super common addition that seems to have first made its way into taffy recipes sometime in the early 20th century.

Some quick chemistry. Glycerol is the simplest, smallest polyol, chemically related to other “sugar alcohols” like maltitol, sorbitol, xylitol, and isomalt. Biologically, it’s a common molecule in plants and animals, as it forms the backbone of all triglyceride fats.

As to the reason why it’s used in food, it’s kind of complicated. Glycerin is strongly hygroscopic, meaning it absorbs and holds moisture. That’s why it shows up in lots of soaps and moisturizers and cosmetics and “personal lubricants.”

In food, this hygroscopic quality makes glycerin useful as a humectant that keeps the food moist and reduce the amount of free water that is available for bacteria, yeast, and molds.

Glycerin is also naturally sweet — about 60% as sweet as table sugar — as well as fairly neutral tasting, which makes it an attractive additive for candy recipes.

In taffy recipes, glycerin extends the shelf life of the candy by stabilizing the amount of moisture. If you imagine an early-20th-Century candy shop, with taffy wrapped in non-airtight wrappers piled into non-airtight bins, you can see why this is helpful.

But there’s a catch. In my own testing, I’ve found that glycerin consistently makes for a softer, stickier, harder-to-handle product. Some recipes also claim that glycerin provides a smoother mouthfeel, but I haven’t seen that effect at all in my own work.

Frankly, when it comes to fresh handmade taffy, I don’t see a big advantage to using it. But maybe ask me for my opinion again when I’m making 100 pound batches of the stuff and trying to keep it fresh in storage.

You’ll sometimes spot sorbitol in ingredient lists; it does basically the exact same thing is glycerin.

Native and modified starches show up in a lot of taffy recipes, and their function here is similar to their function in many other confectionery recipes: they are thickeners or gelling agents.

In taffy, they make the final product less fluid and less prone to cold flow, without necessarily making it harder to chew. They probably also help bind the water in the recipe and thus delay sugar crystallization, although I’ve seen some conflicting research on how important this effect is.

It’s all monstrously complicated and I get the impression that even food technologists have trouble predicting it all, but the key idea is that you can use different starches to get a longer or shorter or softer or harder or smoother or more grainy texture.

Native (unmodified) corn starch is the traditional go-to in most taffy recipes.

Starches aren’t the only gelling agents that show up sometimes in taffy recipes. You’ll probably also spot gelatin, and sometimes agar or carrageenan or gum arabic, especially in products that are marketed as “fruit chews” rather than taffy. These modify the texture in unique ways while reducing or eliminating cold flow.

Much to the dismay of vegetarians everywhere, Starburst is the most readily available taffy that (in most markets) uses gelatine to achieve a specific texture. But for my money, Morinaga Hi-Chew uses it to the fullest effect for a bouncy, dense, chewing-gum mouthfeel.

The other other stuff.

Every manufacturer and maker of fruit chews has their own secret sauce, so there are some additional outlier ingredients that pop up from time to time.

If an ingredient doesn’t fall into these categories, chances are it’s there for flavour or colour.